The Future Of Cruising Has Arrived - World's First Smartship, Quantum Of The Seas, Sails Into New York Harbor

MIAMI, Nov. 10, 2014 — (PRNewswire) — She's smart, fashionable, tech savvy and incredibly adventurous, and she's poised to bring the cruise industry into the 21st century. Royal Caribbean International's newest cruise ship Quantum of the Seas arrived into her homeport of Cape Liberty Cruise Port in Bayonne, NJ today, bringing with her a wave of unprecedented first-at-sea features and amenities. Superfast wireless connectivity, the world's first robotic bartenders, a skydiving simulator, bumper cars, futuristic entertainment, and partnerships with celebrated chefs Jamie Oliver, Michael Schwartz and Devin Alexander, are just a small sample of what the modern age of cruising looks like onboard Quantum of the Seas.

To view the multimedia assets associated with this release, please click: http://www.multivu.com/players/English/7081453-quantum-of-the-seas-future-of-cruising-royal-caribbean/

"Quantum of the Seas isn't just changing cruising, it's changing how today's traveler vacations," said Richard D. Fain, chairman and CEO, Royal Caribbean Cruises Ltd. "It's not just how you travel, it's the experience from start to finish. With Quantum we are empowering our guests to customize every aspect of their journey, providing them with an unprecedented level of freedom and flexibility."

The Smartest Ship at Sea
Unprecedented levels of technology amp up the vacation experience onboard Quantum of the Seas which allows for the utmost in simplicity, efficiency and customization. Guests can be online and connected 24/7 should they choose to be, thanks to superfast wireless speeds that match broadband connections onshore, while RFID luggage tags provide the option of tracking luggage in real time through smartphones, and a downloadable app, Royal iQ, empowers guests to manage every detail of their vacation during the cruise. Not to mention robots! Technology also enables a number of surprise-and-delight elements on Quantum of the Seas, including a brand new venue, Bionic Bar powered by Makr Shakr that is set to make waves with robots at center stage.

Activities that Make You Say "WOW"
Royal Caribbean added to its portfolio of exclusive, groundbreaking onboard experiences that have never before been imagined at sea with a skydiving experience called RipCord by iFLY, as well as the engineering marvel North Star, a glass observation capsule that gently rises more than 300 feet in the air to treat guests to dramatic 360-degree views. More "firsts" including bumper cars, a circus school with flying trapeze and roller skating can be found inside SeaPlex, the largest indoor active space at sea.

A New Era of Dining at Sea
Cruise ship dining has also been modernized onboard Quantum of the Seas with Dynamic Dining, where guests have total control of their own culinary journey and can choose from a landscape of 18 distinctive restaurants. Five complimentary, full-service restaurants replace the traditional, common main dining room, while a variety of specialty restaurants will wow even the savviest foodist, including the new multi-sensory venue Wonderland Imaginative Cuisine, as well as concepts from award-winning chefs Jamie Oliver, Michael Schwartz and Devin Alexander.

Show-Stopping Entertainment
Technology headlines Quantum's entertainment with a lineup of first of their kind productions and performances, and is most prevalent in the ship's transformational new venue Two70. Here the most highly advanced digital displays, Vistarama and Roboscreens, intertwine with live performers, music and special effects to deliver spectacular, multidimensional shows and events that have never before been seen on land, let alone at sea. The Royal Theater is home to Broadway's smash hit musical MAMMA MIA! as well as an all-new headline show, Sonic Odyssey, which was inspired by musician and innovator William Close and his variety of one-of-a-kind majestic instruments, while the all-new Music Hall sets the stage for live music featuring bands, musicians, DJs, theme night parties and more.

Spacious Rooms with a View
Sophisticated in design and big on size – an average of nine percent larger than those of Oasis class ships – the 2,090 staterooms onboard Quantum of the Seas are Royal Caribbean's largest and most advanced yet. Guests can choose from a wide selection of categories, including Family-Connected staterooms that are perfect for multi-generational families or groups of friends, new balcony and interior Studio staterooms that were created for single travelers, as well as Virtual Balcony staterooms, which are interior accommodations with large digital screens display real time views that ensure every room has a view. What's more, Quantum's lofts and suites are the most luxurious yet, and were designed with insight from HGTV star Genevieve Gorder, who was Quantum Experience Advisor for Design.

Shopping, Fitness, Family and More!
Every aspect of Quantum of the Seas is complete with the newest, most sophisticated features at sea. The retail offerings, which can be found within the Royal Esplanade and The Via, boast an unparalleled collection of celebrated brands including Cartier, Kiehl's, BVLGARI and Hublot. State-of-the-art fitness facilities make it easy and inspiring to stay fit while on vacation, with all-new options including Technogym equipment, as well as well as professionally instructed Flywheel, TRX and Beach Bootcamp classes, which were influenced by former NFL linebacker Dhani Jones, who worked with Royal Caribbean as Quantum Experience Advisor for Sports and Fitness. And there's fun for the whole family, thanks to a number of new enhancements to Royal Caribbean's award-winning Adventure Ocean youth program, including a fully-equipped Adventure Science Lab, as well as the very first wave pool at sea, which debuts as part of the DreamWorks Animation Madagascar-themed H2O Zone.

Media can stay up-to-date by following @RoyalCaribPR on Twitter and visiting RoyalCaribbeanPressCenter.com. 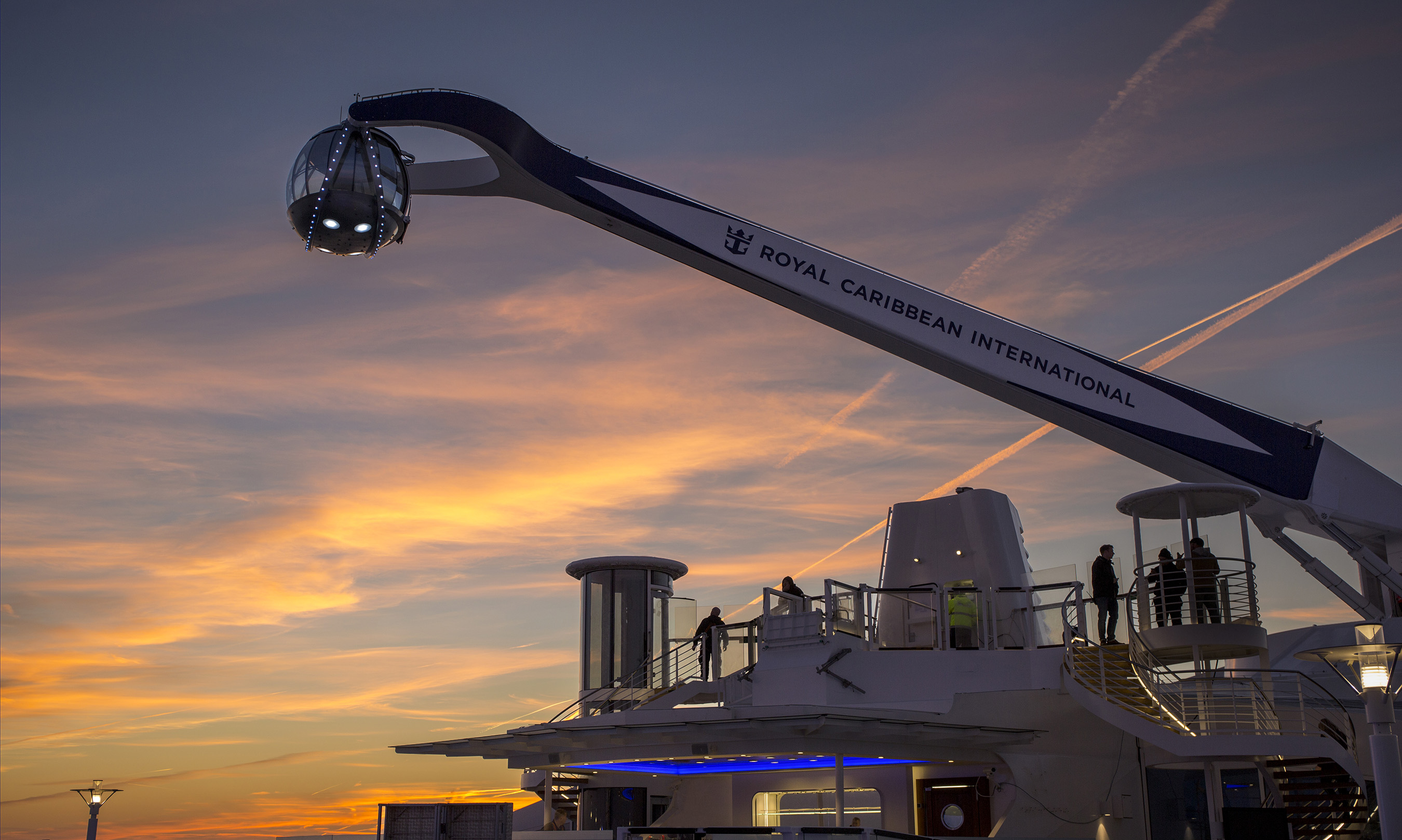