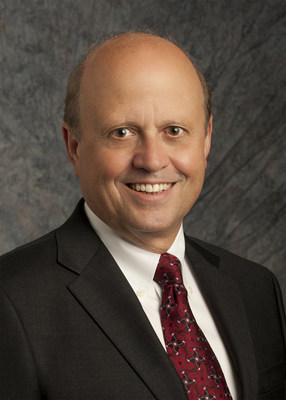 The IEEE Grade of Fellow is conferred by the IEEE Board of Directors upon a person with an outstanding record of accomplishments in any of the IEEE fields of interest. The total number selected in any one year cannot exceed one-tenth of one percent of the total voting membership. IEEE Fellow is the highest grade of membership and is recognized by the technical community as a prestigious honor and an important career achievement.

During Dr. Rhines' tenure at Mentor Graphics, revenue has nearly quadrupled, enterprise value increased by 8X and Mentor has grown the industry's number one market share solutions in four of the ten largest product segments of the electronic design automation (EDA) industry. At Mentor Graphics, he has built leading industry positions in areas outside of traditional EDA, including system design, embedded software, automotive and hardware emulation. This has led to innovation and growth of the entire EDA industry.

During his 21 years at TI, Rhines managed TI's thrust into digital signal processing and supervised that business from inception with the TMS 320 family of DSPs through growth to become the cornerstone of TI's semiconductor technology. He also supervised the development of the first TI speech synthesis devices (used in "Speak & Spell") and is co-inventor of the GaN blue-violet light emitting diode (now important for DVD players and low energy lighting). He was president of TI's Data Systems Group and held numerous other semiconductor executive management positions.

Dr. Rhines received the 2015 Phil Kaufman Award for Distinguished Contributions to EDA, presented by the Electronic System Design Alliance (ESDA), formerly the Electronic Design Automation Consortium, and the IEEE Council on EDA (CEDA). The award honors individuals who have had demonstrable impact on the field of EDA through technology innovations, education/mentoring, or business or industry leadership. Dr. Rhines was recognized for growing the EDA and integrated circuit (IC) design industries through his efforts as a leading voice of EDA and for pioneering the evolution of IC design to system-on-chip (SoC) design.

Rhines has served five terms as ESDA chairman and is currently serving as a director. He is also a board member of the Semiconductor Research Corporation. He has previously served as chairman of the Semiconductor Technical Advisory Committee of the Department of Commerce and as a board member of the Computer and Business Equipment Manufacturers' Association (CBEMA), SEMI-Sematech/SISA, University of Michigan National Advisory Council, Lewis and Clark College and SEMATECH.

About IEEE
The IEEE is the world's leading professional association for advancing technology for humanity. Through its 400,000-plus members in 160 countries, the association is a leading authority on a wide variety of areas ranging from aerospace systems, computers and telecommunications to biomedical engineering, electric power and consumer electronics. Dedicated to the advancement of technology, the IEEE publishes 30 percent of the world's literature in the electrical and electronics engineering and computer science fields, and has developed more than 1300 active industry standards.  The association also sponsors or co-sponsors nearly 1700 international technical conferences each year.  If you would like to learn more about IEEE or the IEEE Fellow Program, please visit www.ieee.org.

To view the original version on PR Newswire, visit: http://www.prnewswire.com/news-releases/mentor-graphics-ceo-walden-c-rhines-named-ieee-fellow-300390691.html