The Full Production, Directed by Tony Award-Winner Andy Blakenbuehler, Behind-the-Scenes Footage and More Arrives on the Big Screen June 25 and 28

DENVER, April 30, 2018 — (PRNewswire) —  "Bandstand," Richard Oberacker and Robert Taylor's Broadway musical directed and choreographed by three-time Tony Award winner Andy Blankenbuehler (Hamilton), will bring high-octane, heart-stopping, spectacular dancing to movie theaters nationwide this summer in "The Boys Are Back - BANDSTAND: The Broadway Musical on Screen." In addition to the feature content, audiences will enjoy behind-the-scenes and never-before-seen footage of the production. 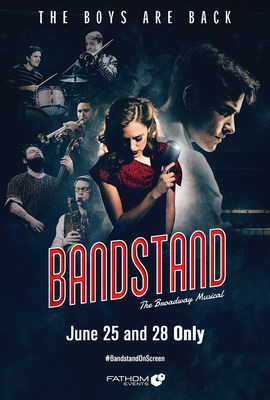 Tickets for "BANDSTAND: The Broadway Musical on Screen" are available at www.FathomEvents.com or participating theater box offices.

Presented by Fathom Events and Sing Out, Louise! Productions, this special two-night event will premiere in more than 700 U.S. cinemas on Monday, June 25 and Thursday, June 28 at 7:00 p.m. local time (both dates), through Fathom's Digital Broadcast Network (DBN). For a complete list of theater locations, visit the Fathom Events website (theaters and participants are subject to change).

"This stunning film captures the spirit of the Broadway production, but at the same time allows the audience to get closer than they ever would be able to in the theater," Blankenbuehler said. "It is a powerful reminder about the importance of honoring all the sacrifices that have gotten us to where we are. Service men and women, teachers, mentors, parents…they have built a foundation underneath all of us.  And this beautiful story shows us that art and love can heal the soul no matter how deep the injuries go."

America's soldiers come home from war in 1945 to ticker-tape parades and overjoyed families, while Private First Class Donny Novitski (Corey Cott), singer and songwriter, returns to rebuild his life with only the shirt on his back and a dream in his heart. When NBC announces a national competition to find the nation's next great musical superstars, inspiration strikes. Donny joins forces with a motley group of fellow veterans, each an astonishing musician, and young war widow Julia Trojan (Tony Award nominee Laura Osnes), an aspiring jazz singer. Together, they form a band unlike any the nation has ever seen. Along the way, they discover the power of music to face the impossible, find their voice and finally feel like they have a place to call home.

"Bandstand" is presented in special partnership with the military non-profit TAPS, which cares for the families of America's fallen heroes. The Broadway musical was also the first live entertainment production ever to be "6 Certified" by Got Your 6, for its accurate portrayal of the veteran experience.

"It's very exciting to bring an original musical of this stature to the big screen," Fathom Events Chief Content and Programming Officer Gordon Synn said. "This show has not only world-class singing and dancing but also a lot of heart and a great message that we hope will touch cinema audiences across the U.S."

"It is a great honor and thrill to bring this completely original musical, filled with heart and hope, to the big screen," producer Tom Smedes said. "While on Broadway we saw firsthand how much this story resonated with audiences and, most especially, veterans. It's a tribute to them and all American heroes and we are overjoyed that the film of the Broadway musical will now be able to reach the entire country."

For artwork/photos related to "BANDSTAND: The Broadway Musical on Screen," visit the Fathom Events press site.