Maxar's SSL ships first of three advanced communications satellites scheduled to launch on the SpaceX Falcon 9 this summer
PALO ALTO, CA, June 21, 2018 — (PRNewswire) — SSL, a Maxar Technologies company (formerly MacDonald, Dettwiler and Associates Ltd.) (NYSE: MAXR, TSX: MAXR), today announced it shipped the first of three satellites that SSL will deliver to the SpaceX launch base at Cape Canaveral Air Force Station in Florida over the next month. Driven by commercial advances, the three satellites will bring communications capability to connect people and transform lives around the globe. 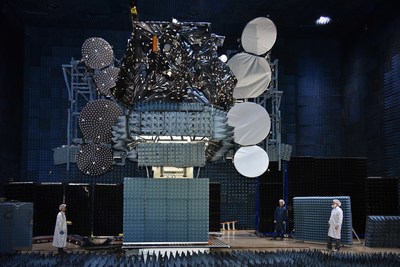 Telstar 19 VANTAGE, an advanced high throughput satellite (HTS) built for Telesat, one of the world's leading satellite operators, marks the 50th SSL-built communications satellite to launch this decade. It arrived safely at the launch base this week for a launch scheduled next month.

Two more SSL communications satellites are scheduled to ship to SpaceX launch base over the next month including a second HTS for Telesat, Telstar 18 VANTAGE, and the Merah Putih satellite (previously known as Telkom-4), for Indonesia's largest telecommunication and network provider, PT Telkom Indonesia (Persero) Tbk.

"SSL has a long legacy of leveraging its commercial mindset to provide satellite operators with spacecraft systems that address their requirements and enable global transformation," said Dario Zamarian, group president, SSL. "The cadence this month of shipping out three satellites for launch demonstrates our ongoing market leadership and commitment to quality, reliability, and performance."

Telstar 19 VANTAGE is one of a new generation of Telesat spacecraft designed to serve today's bandwidth intensive applications. It will support a range of services, including advanced broadband connectivity for consumer, enterprise and mobility users across the Americas and Atlantic from its prime orbital location of 63 degrees West, the same location used today by Telesat's Telstar 14R.

Telstar 18 VANTAGE, the third HTS in Telesat's global fleet, will be located at 138 degrees East, an ideal position for connecting Asia to the Americas. It will replace and expand on the capabilities of Telesat's Telstar 18 satellite through its extensive C-band coverage of Asia, its Ku-band HTS spot beams over Indonesia and Malaysia, and its six additional Ku-band regional beams. These high performance beams will enable Telstar 18 VANTAGE to meet growing demand for mobility, enterprise networks and telecom services across the Asia region. As previously announced, Telesat has partnered with APT Satellite of Hong Kong in the design and procurement of this spacecraft, which APT calls Apstar-5C.

"Telesat has worked closely with SSL and the Maxar family of companies for many years and we are pleased to have collaborated with them on our newest Telstar VANTAGE high throughput satellites," said Dan Goldberg, President and CEO of Telesat. "These state-of-the-art spacecraft are going to provide important competitive advantages for our customers across the Americas and Asia. It's great news that Telstar 19 VANTAGE is now at the launch base and that Telstar 18 VANTAGE is nearly finished and in the queue to ship."

Merah Putih, a name which represents the red and white of the Indonesian flag, will be integrated into Telkom's greater telecommunications network to provide service throughout the 17 thousand islands of the Indonesian archipelago, as well as India and other parts of South and Southeast Asia. Satellite forms the telecommunications backbone that connects Indonesia, along with other technologies, such as submarine cable.

Merah Putih, which was completed ahead of schedule, will replace Telkom-1, at 108 degrees East, where it will expand on Telkom's coverage to serve new markets. Its all C-band payload will enhance both internet and telephone service for populations in remote regions and offload backhaul for cellular service.

"Satellite plays a vital role in our telecommunications infrastructure," said Mr. Mr. Zulhelfi Abidin, Chief Technology Officer of Telkom. "SSL has been an excellent spacecraft supplier and has completed the satellite construction ahead of schedule. We look forward to traveling to Florida to see the satellite launch later this summer."

As a global leader of advanced space technology solutions, Maxar Technologies (formerly MacDonald, Dettwiler and Associates) is at the nexus of the new space economy, developing and sustaining the infrastructure and delivering the information, services, systems that unlock the promise of space for commercial and government markets. As a trusted partner, Maxar Technologies provides vertically-integrated capabilities and expertise including satellites, Earth imagery, robotics, geospatial data and analytics to help customers anticipate and address their most complex mission-critical challenges with confidence. With more than 6,500 employees in over 30 global locations, the Maxar Technologies portfolio of commercial space brands includes MDA, SSL, DigitalGlobe and Radiant Solutions. Every day, billions of people rely on Maxar to communicate, share information and data, and deliver insights that Build a Better World. Maxar trades on the Toronto Stock Exchange and New York Stock Exchange as MAXR. For more information, visit www.maxar.com .