50 Years After the Era-Defining Events of 1968, 'Across the Universe' Returns to U.S. Cinemas for Three Days Only This Summer, Recalling the Power of Youth, Protest, Music and Passion to Change the World

DENVER, June 25, 2018 — (PRNewswire) —  It's been a half-century since the world-shaking events of 1968, when young people – fueled by a vision of a different future – rose in revolt. Their passion and protests are depicted in director Julie Taymor's singular "Across the Universe." To mark the 50th anniversary of that pivotal year, "Across the Universe" will return to movie theaters nationwide for three days only on July 29, July 31 and August 1. 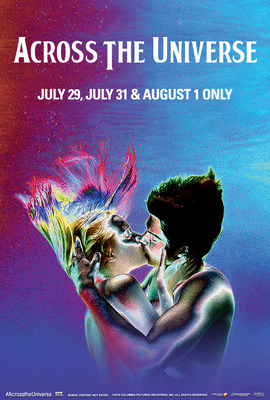 Tickets for "Across the Universe" can be purchased at www.FathomEvents.com and at participating theater box offices.

Fathom Events and Sony Pictures Entertainment present "Across the Universe" in more than 450 select movie theaters on Sunday, July 29, at 2:00 p.m. and 7:00 p.m.; Tuesday, July 31, at 7:00 p.m.; and Wednesday, August 1, at 7:00 p.m. (all local times). A complete list of theater locations is available on the Fathom Events website (theaters and participants are subject to change).

"'Across the Universe' was created around the extraordinary, time-defying music of The Beatles," said Taymor. "Thirty-three songs of Lennon, McCartney and Harrison not only drive the story but provide the voices of the characters and content of the times."

Propelled by such unforgettable songs as "Hey Jude" and "All You Need Is Love," all performed by the film's extraordinary cast. "Across the Universe" brings the era of rapid, radical change to life through the unmatched creative vision of director Taymor, a screenplay by Dick Clement & Ian La Frenais and a story by Julie Taymor & Dick Clement & Ian La Frenais. The result is an epic, visually stunning musical unlike any other, combining cinematic, artistic and theatrical techniques with vivid performances and vibrant choreography.

Legendary critic Roger Ebert hailed "Across the Universe" as "an audacious marriage of cutting-edge visual techniques, heart-warming performances (and) 1960s history." The New York Times' Stephen Holden wrote, "'Across the Universe' captured my heart," and that the film "feels emotionally true … to the decade it remembers."

Starring Evan Rachel Wood ("Westworld," Thirteen) and Jim Sturgess (21, Cloud Atlas) as Lucy and Jude, whose love inspires them to become involved with the protests and counter-culture movement that dominated the cultural landscape in 1968, "Across the Universe" has become a film its fans turn to over and over again for inspiration.

"'Across the Universe' has developed an extraordinary following since its release in 2007," Fathom Events VP of Studio Relations Tom Lucas said. "This theatrical re-release presents an amazing opportunity for those fans to see, hear and feel this revolutionary film in a very unique way on the big screen."

For artwork/photos related to "Across the Universe," visit the Fathom Events press site.