Real-Time Strategy Game "Hash Rush" Partners with WAX and OPSkins Marketplace
RIGA, Latvia and GRAND CAYMAN, Cayman Islands, Aug. 14, 2018 — (PRNewswire) — Hash Rush and Worldwide Asset eXchange (WAX)™ today announced that the company's in-game items will be tradeable on WAX ExpressTrade and available for purchase on OPSkins™ using WAX Tokens, Bitcoin, ETH, US dollars, Euros and dozens of other currencies. These items will include in-game skins, special boosts, tokenized planets, and more. Hash Rush items are built for cross-game functionality, meaning they can transition to be used in other blockchain games as well. 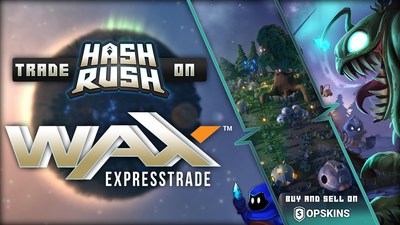 Hash Rush is a real-time strategy game that allows gamers to compete with each other for cryptocurrency and other rewards such as new skins and boosts. Players work to establish Crypto Crystal mining colonies on their planets. They can attack enemies to gain more Crypto Crystals, and in turn defend their own Crypto Crystals from threats by building and strengthening their mining colonies. These colonies help players build wealth and progress up leaderboards. Players can buy, sell and trade items using the in-game marketplace and RUSH Coin cryptocurrency.

"The possibilities that non-fungible tokens (NFTs) present are very exciting for us. Not only does this mean we can assure total authenticity and fraud protection, but we can offer players virtual goods that have value outside of the game itself," said Rob Nicholls, Lead Game Designer of Hash Rush. "As far as in-game uses, we are already planning to integrate tokens that can be redeemed for game units, skins, titles and resources; tokens that can be traded between players in our marketplace; and limited edition tokens that are rare and collectible."

"We will be distributing our own tokenized in-game items and allowing players to tokenize items themselves," said Kristaps Vaivods, Co-Founder & CEO of Hash Rush. "As trading is one of the primary game pillars in Hash Rush, NFTs are going to be an important part of the gameplay. ERC-721s will allow players not only to get unique items, units and skins but also much more. As an example, we are planning blueprint cards which will allow players to craft and distribute entirely new NFTs."

"The inception of blockchain-based games and collectibles presents a new opportunity for the crypto community to get involved, and game developers are taking notice," said Malcolm CasSelle, CIO of OPSkins and President of WAX. "As the popularity of blockchain games and Crypto Collectibles™ grows, so does the need for a trustworthy marketplace, which is where WAX and OPSkins come in. Integrating Hash Rush to that ecosystem is an exciting move for us and for the blockchain-based gaming community as a whole."

WAX was built by the creators of OPSkins.com — the dominant virtual item marketplace that has facilitated over 150 million purchases of digital collectibles. With the integration of Hash Rush's in-game assets onto the OPSkins platform, WAX Tokens gain additional utility and more players are incentivized to join the ecosystem.

About Hash Rush
Latvian studio VZ Games is leading the way in video gaming and cryptocurrency mining integration with their flagship title Hash Rush, an upcoming free-to-earn PC and mobile title. The team brings together talent from the likes of Microsoft Games Studio, Ubisoft, CCP Games, NVIDIA and Xbox, bringing over 100 years combined industry experience. VZ Games is supported by VZ Mining, responsible for the cryptocurrency reward pool paid to players, and VZ Chains, developers of the RUSH Network – an Ethereum-based scaling solution that facilitates gasless transactions between players using a custom sidechain. Hash Rush was born on Ethereum but scales with the RUSH Network. For more information, follow Hash Rush on Telegram, Twitter, Discord and visit their website. You can also sign up for their 10,000 player beta version here, with a chance to win $30,000 ETH during the course of the beta test.  The whitelist for the RUSH Coin token sale is now accepting signups at their new site www.hashrush.com/ico.

About WAX (Worldwide Asset eXchange)
WAX is a blockchain-based platform, enabling anyone to operate a fully functioning marketplace for virtual items with zero investment in security, infrastructure or payment processing. Developed by the founders of OPSkins™, WAX is designed to serve the 400+ million online players who already collect and trade video game items and other digital collectibles. WAX ExpressTrade, a free, instant peer-to-peer trading service, is now live and supports VGO, the most transacted Crypto Collectible by volume. With the inclusion of WAX, game developers and collectible creators have access to a global market of buyers and sellers and an easy-to-use marketplace for their customers. For more information, please visit https://wax.io and http://www.opskins.com.