GKIDS and Fathom Events Return with a New Studio Ghibli Series Lineup of Celebrated Animated Masterpieces in U.S. Cinemas Throughout 2019

DENVER, Feb. 14, 2019 — (PRNewswire) —  After kicking off in 2017 and returning for an even more successful 2018, STUDIO GHIBLI FEST is back for 2019. GKIDS, the acclaimed distributor of multiple Academy Award®-nominated animated features, and Fathom Events are proud to continue their collaboration and deliver a new and expanded selection of celebrated animated films to U.S. cinemas throughout the year with STUDIO GHIBLI FEST 2019. 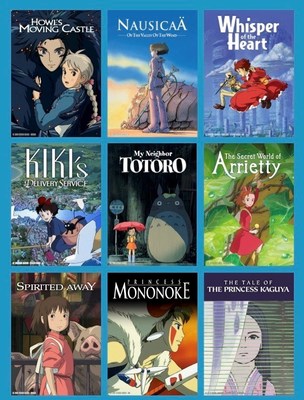 Tickets for STUDIO GHIBLI FEST 2019 can be purchased online beginning Thursday, March 7 by visiting www.FathomEvents.com, www.ghiblifest.com or at participating theater box offices. A complete list of theater locations will be available on the Fathom Events website March 7 (theaters and participants are subject to change). Weekday showings begin at 7:00 p.m. and Sunday showings begin at 12:55 p.m. (all local times).

Tickets for Studio Ghibli Fest 2019 in Canada go on-sale on March 7. Visit our partners at www.Cineplex.com for more information.

"After two extraordinary years of STUDIO GHIBLI FESTs, we couldn't be more pleased to partner with GKIDS once again," Fathom Events CEO Ray Nutt said. "The 2019 anime series gives fans across the nation a unique opportunity to experience these renowned titles together at their local cinemas and we're proud to be able to make these communal viewings possible."

"GKIDS is extremely proud to be bringing the beloved Studio Ghibli films back to the big screen with Fathom Events, so fans can discover and rejoice in these wonderful, iconic animated works throughout 2019!" GKIDS Co-Founder and President Eric Beckman said.

For artwork/photos related to this series, visit the Fathom Events press site.

About GKIDS
GKIDS is a producer and distributor of award-winning feature animation for both adult and family audiences. Since 2010, the company has scored an astounding eleven Best Animated Feature Oscar nominations with The Secret of Kells in 2010, A Cat in Paris and Chico & Rita in 2012, Ernest & Celestine in 2014, The Tale of The Princess Kaguya and Song of the Sea in 2015, Boy and the World and When Marnie Was There in 2016, My Life as a Zucchini in 2017, The Breadwinner in 2018, and Mirai in 2019.  GKIDS also handles North American distribution for the famed Studio Ghibli library of films, one of the world's most coveted animation collections with titles Spirited Away, My Neighbor Totoro, Princess Mononoke and others.  GKIDS recently launched ANIMATION IS FILM, an annual LA-based film festival. ANIMATION IS FILM embraces the highest aspirations of animation as a cinematic art form and is a vocal advocate for filmmakers who push the boundaries of their work to the fullest range of expression that the medium is capable of.
www.gkids.com

Studio Ghibli films have garnered numerous awards and critical acclaim from film critics and animation specialists around the world.  SPIRITED AWAY was awarded the Golden Bear as the Best Feature Film at the 2002 Berlin International Film Festival and won the 2002 Academy Award for Best Animated Feature Film.  In October 2001 , Studio Ghibli, in conjunction with The Tokuma Memorial Cultural Foundation for Animation, founded the Ghibli Museum, Mitaka, designed by Hayao Miyazaki .