HTC VIVE original VR movie "The Making Of" and VR animation "Gloomy Eyes" Nominated for 2019 SXSW Film Festival
TAIPEI, Taiwan, March 8, 2019 — (PRNewswire) — One of the project from HTC VIVE's collaboration with Taipei Golden Horse Film Festival Executive Committee "5x1" -- "The Making Of", and "Gloomy Eyes" which is co-produced by HTC VIVE and Atlas V, both were nominated and eligible for "Best 360 video", "Best use of storytelling in immersive" and "Best use of immersive arts" in the Virtual Cinema category of 2019 SXSW Film Festival. "The Making Of" Director Midi Z was also the winner of Best Feature Film FEDEORA award in the Venice Days section in 2016. When he received the good news from SXSW, he said, "In the process of making 'The Making Of', I was full of frustration. My fear grew stronger, and I was uncertain to short VR. But now I thank film festivals recognition. It gives me more confidence in this new genre and I hope that I can keep challenging myself in the future. When the going gets tough, the tough get going." 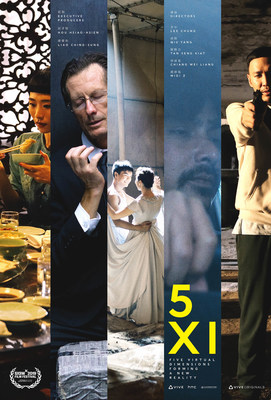 Taiwan-based VR brand HTC VIVE is committed to make the world's best VR device and accumulate original VR content. In 2017, HTC VIVE launched the world's first VR movie "The Deserted", which was nominated at the Venice Film Festival. Then in 2018, HTC VIVE has cooperated with the Taipei Golden Horse Film Festival Executive Committee, produced VR movie "5x1" by Cannes Best Director Hou Hsiao-Hsien and Liao Ching-Sung. The team of directors include Lee Chung, Qiu Yang, Tan Seng Kiat, Chiang Wei-Liang, and Midi Z -- five international (Asia) directors, jointly launched the "5x1" VR movie composed of five short film. "The Making Of", one short film of the "5x1", directed by Midi Z, which is nominated in the Virtual Cinema category of the SXSW Film Festival. On the other hand, HTC VIVE also collaborated with French company Atlas V, who the winner of the Best VR in last Venice Film Festival was. HTC VIVE and Atlas V co-produced VR animation "Gloomy Eyes", after being selected for Sundance, was once again selected for SXSW, reflects that HTC VIVE's original work is becoming a pioneer in VR industry.

SXSW is famous for its biggest music festival in the world, and it is now a creative event that brings together music, movies, and technology interactive arts. Many movie blockbusters such as "Ready Player One", "Star Wars", HBO's "Westworld" have chosen to premiere in the SXSW, which shows SXSW's iconic status of innovative content, technology, art and future market trends.

After knowing that "The Making Of" was nominated in the SXSW Film Festival, "5x1" producer and HTC VIVE VR Content Center vice president Liu Szu-Ming said, "We will continue to launch VIVE Originals content around the world, cultivate the world's top production talents, activate VIVE Reality content ecosystem, enrich human cultural life through new technologies." Director Midi Z said, "I am very happy that 'The Making Of' is nominated at the SXSW Film Festival. SXSW is a world known film festival recognized for its VR lineups in the past few years. It is not easy to be selected as a finalist." He also thanks to HTC, Golden Horse Film Academy, Funique VR. Wu Ke Xi, the actress of "The Making Of", said emotionally, "This is a very challenging VR shooting experience, because everything must be very natural, much like a real documentary, but in fact it is a "False documentary. I am looking forward to hearing the feedbacks from American audiences."