DENVER, April 3, 2019 — (PRNewswire) —  Fathom Events has teamed with Spencer Proffer's Meteor 17 to bring acclaimed filmmaker Erik Nelson's new documentary The Cold Blue, chronicling the heroic struggles of the U.S. Eighth Air Force during World War II, to the big screen on May 23 only. The new film, from Paul G. Allen's Vulcan Productions and Creative Differences, was constructed using recently discovered and meticulously restored raw color footage from the WWII-era documentary Memphis Belle: A Story of a Flying Fortress, directed by the legendary director William Wyler and filmed aboard B17s during combat air missions. A meditation on youth, war and trauma, The Cold Blue is a tribute to one of the world's greatest filmmakers, his cameraman Harold Tannenbaum – who perished in combat while filming – and the men of the Eighth Air Force, who flew mission after lethal mission during the Air War. 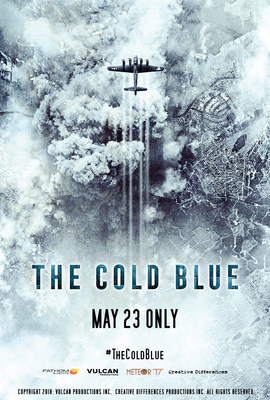 Fathom Events will exclusively premiere The Cold Blue in cinemas across the globe on Thursday, May 23 at 7:30 p.m. local time. Tickets for U.S. screenings can be purchased beginning April 5 at www.FathomEvents.com and participating theater box offices. International cinema locations and ticket-on-sale dates will be announced at a later date.

The Cold Blue Fathom event is produced by Spencer Proffer of Meteor 17. The documentary, produced by Vulcan Productions and Creative Differences in association with HBO Documentary Films, was made with the full cooperation of the Wyler Estate and Catherine Wyler. Produced by Peter Hankoff; executive produced by Paul G. Allen, Carole Tomko, Rocky Collins, Catherine Wyler, Clark Bunting and Dave Harding; directed and produced by Erik Nelson.

"This project was a labor of love that has been three years in the making, from the discovery of William Wyler's original footage to working closely with the National Archives to restore it frame by frame," said The Cold Blue director Erik Nelson. "We're excited to finally share this special project with audiences across the United States, and to celebrate the last of the best — the men who risked their lives to save the world 75 years ago."

"My father would be amazed and delighted that the aerial footage he and his camera crew shot in such terrifying conditions is having a new life and new audiences 75 years later," said The Cold Blue executive producer Catherine Wyler. "Erik Nelson's new work captures the danger and the courage required of our airmen in the battle over Europe."

The film features interviews with nine of these surviving veterans, whose voices narrate the harrowing world that Wyler and his cameramen captured in the summer of 1943. The immersive theatrical experience also includes an original orchestral score from celebrated musician and composer Richard Thompson (Grizzly Man), and sound design by David Hughes (Black Panther).

"The Cold Blue is a first-of-its-kind documentary, which reinvents the visionary work of one of our greatest American directors to create an entirely new film," said Fathom Events CEO Ray Nutt. "Fathom is proud to give this documentary a showcase fit for its technical feats, historical importance and beautiful storytelling — on big screens worldwide."

For artwork/photos related to The Cold Blue, visit the Fathom Events  press site.

About Meteor 17 & Spencer Proffer
Headquartered in Los Angeles, this convergence and production venture is helmed by innovative media and music producer, Spencer Proffer. M17 is producing and is developing an ambitious slate of projects across music, TV, film, Internet, live event, and other platforms, integrating brand marketing and music as organic components. M17 is a full service organization that actively participates from conception and architecture through all phases of deal making, production, marketing and distribution entities highlighted on www.meteor17.com.

About Creative Differences
Creative Differences has produced an array of notable feature documentaries, including Werner Herzog's Grizzly Man (2005), Herzog's Oscar nominated Encounters At The World (2008) and the 2011 3D box office hit Cave Of Forgotten Dreams. Company founder Erik Nelson has also produced and directed such films as the 2008 biography of writer Harlan Ellison, Dreams With Sharp Teeth, as well as the 2012 animated feature Dinotasia and 2017's A Gray State. For more information on Creative Differences, please visit  http://cdtvfilms.com.