Kermit the Frog, Miss Piggy, Fozzie Bear, the Great Gonzo and an All-Star Cast Take a Journey From the Swamp to Hollywood in the Original Classic

DENVER, June 3, 2019 — (PRNewswire) —  Forty years ago this summer, a frog with a dream to make millions of people happy hopped out of the swamp, onto a bicycle and into cinema history in "The Muppet Movie." For two days only this July, the original classic is back in movie theaters nationwide from Fathom Events, The Jim Henson Company and Universal Pictures. 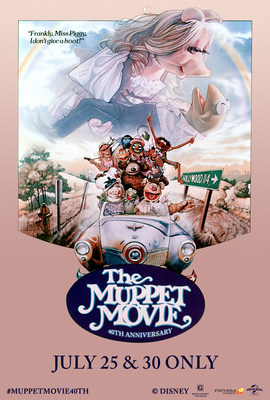 Tickets are available at www.FathomEvents.com or at participating theater box offices.

"The Muppet Movie" will play in more than 700 movie theaters on Thursday, July 25, and Tuesday, July 30, at 12:30 p.m. and 7:00 p.m. local time each day through Fathom's Digital Broadcast Network (DBN). For a complete list of theater locations, visit the Fathom Events website (theaters and participants are subject to change).

Following massive global success with the television hit "The Muppet Show," which at its height aired in more than 100 countries around the world, Muppets creator Jim Henson took a huge creative risk to have the characters star in their first motion picture. The result, "The Muppet Movie," directed by James Frawley, proved to be an enormous box-office hit. The film also charmed critics and received an Academy Award® nomination for "The Rainbow Connection," the film's iconic theme song with music and lyrics by Paul Williams and Kenneth Ascher.

The film stars Kermit (performed by Henson), Miss Piggy and Fozzie Bear (performed by Frank Oz), Gonzo (performed by Dave Goelz) and his chicken Camilla (performed by Jerry Nelson), Scooter (performed by Richard Hunt), and Dr. Teeth and the Electric Mayhem as they embark on a road trip to Hollywood where fame and fortune beckons, driven only by hope, dreams and a wisecracking bear.

"'The Muppet Movie' is a cinematic treasure, a delightful film that may have been made 40 years ago but is truly timeless, thanks both to its iconic characters and to its always-stirring theme of following your dreams and believing in your own abilities," said Tom Lucas, Fathom Events Vice President of Studio Relations. "This film's return to the big screen is very well deserved and we are happy to work with The Jim Henson Company and Universal Pictures to give it a proper nationwide re-release."

For artwork/photos related to "The Muppet Movie," visit the Fathom Events press site.

About The Jim Henson Company

The Jim Henson Company has remained an established leader in family entertainment for over 60 years and is recognized worldwide as an innovator in puppetry, animatronics and digital animation. Best known as creators of the world-famous Muppets, Henson has received over 50 Emmy Awards, two Academy Awards and nine Grammy Awards. The Company is currently in production on the feature film The Happytime Murders, starring Melissa McCarthy, and the upcoming Netflix original series The Dark Crystal: Age of Resistance. Recent credits include Julie's Greenroom (Netflix), Dot. (Sprout/Hulu), Splash and Bubbles (PBS), Word Party (Netflix), Doozers (Hulu/ Sprout), and the Emmy®-nominated Sid the Science Kid (PBS), and Dinosaur Train (PBS). Television productions include Fraggle Rock, The Storyteller and the sci-fi cult series Farscape. Features include The Dark Crystal, Labyrinth, and MirrorMask. Projects in development include the highly anticipated film Fraggle Rock.

The Jim Henson Company is headquartered in Los Angeles on the historic Charlie Chaplin lot with additional locations in New York and London. The Company is home to Jim Henson's Creature Shop™, a pre-eminent character-building, and visual effects group, as well as Henson Recording Studios, one of the music industry's top recording facilities.