Warner Bros. Celebrates 50 Years Of Scooby-Doo With A 50 Days Of Scooby Fan And Family Celebration

Join The Mystery Inc. Gang For A Summer Filled With Mysteries, Meddling, Munchies, And More

BURBANK, Calif., July 11, 2019 — (PRNewswire) —  Warner Bros. Consumer Products (WBCP) and Scooby-Doo are inviting new and old pals to celebrate 50 years of mysteries, meddling, munchies and more as Scooby continues to befriend a whole new generation of curious-minded kids and evoke nostalgia with parents through the launch of the "50 Days of Scooby" celebration. The countdown kicks off on July 26 and will culminate on our beloved canine friend's spooky birthday on Friday, September 13. 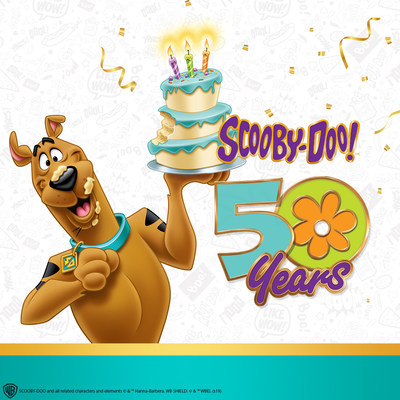 In honor of 50 years, we're creating a world of mysterious fun where fans of all ages are invited to join the adventure, solve problems and do good. To celebrate the anniversary, Warner Bros. is giving fans 50 days of content, giveaways, product, downloadable activities and many more surprises. In addition, fans will be treated to classic and new releases including the latest Scooby-Doo series Scooby-Doo and Guess Who? which recently premiered on Boomerang, Scooby-Doo! Return to Zombie Island and Scooby-Doo, Where are You!: The Complete Series Limited Edition 50th Anniversary Mystery Mansion from Home Entertainment, and original digital content with the launch of the One Minute Mysteries series. New Scooby-Doo inspired products, from food and games to apps, will also be revealed during the 50 days; as well as various partnerships within global themed entertainment, local family restaurants, interactive activations and retail experiences.

"The love for Scooby-Doo has been passed from generation to generation, and this year we're celebrating 50 years of our favorite canine friend," said Maryellen Zarakas, senior vice president, franchise management and marketing, Warner Bros. Consumer Products. "With the release of content, unique experiences and a new assortment of products we're giving fans an opportunity to celebrate Scooby in every way imaginable."

The 50 days of Scooby celebration will be centralized on a microsite housing a digital calendar that unlocks daily to reveal a slew of surprises fans can enjoy with their friends and family. Everyone can join in on the fun whether it's downloading the Mystery Machine coloring activity page; viewing an unboxing with Imaginext's Scooby-Doo Viking Ship; participating in a Capstone giveaway to win a free book from Scooby-Doo Mysteries; or watching "One Minute Mysteries," snackable clips that adapt fan-favorite episodes from the past 50 years. In addition to Capstone, other partners participating in the 50 day celebration include USAopoly, Random House, Cakes.com, BoxLunch and Kelloggs.

Join us at Comic-Con International on Saturday, July 20 (12:30-1:30 p.m., Room 6A) as we salute that lovable Great Dane, Scooby-Doo and the Mystery Inc. gang with a panel spotlighting half a century of crime-solving silliness. For 50 years, the Mystery Inc. gang has entertained Scooby-Doo fans with zany hijinks, action-packed adventures and engaging mysteries that have captivated viewers of all ages. What started as a Saturday morning cartoon exploded into an enormously successful franchise encompassing multiple spin-off series, original animated and live action films, consumer products and much more. Included in the celebration the panel will feature several key showrunners, filmmakers and stars of the franchise – and a glimpse of the upcoming Scooby-Doo, Where are You!: The Complete Series Limited Edition 50th Anniversary Mystery Mansion box set available in stores on September 3, 2019.

Pack your Scooby Snacks and join the Mystery Inc. gang as the teen sleuths embark on a wild and spooky vacation with zombies and cat people on Scooby-Doo! Return to Zombie Island, an all-new, original film. Be among the first live audience to see Scooby-Doo! Return to Zombie Island at Comic-Con International in San Diego on Sunday, July 21 (10:15-11:45a.m., Room 6BCF). This new animated adventure finds Scooby-Doo and his pals taking a much-deserved vacation to a tropical island. Instead of getting rest and relaxation, however, they find themselves wrapped up in one of their biggest mysteries yet!  Produced by Warner Bros. Animation, the film arrives from Warner Bros. Home Entertainment on Digital starting September 3, 2019 and on DVD October 1, 2019.

The 50 Day countdown leads into Scooby's 50th birthday on September 13 with a birthday bash filled with a day of adventure and mystery-solving fun on the WB Studio Lot. During the week leading up to the big birthday, a comprehensive party pack will be available on the calendar so kids and families can celebrate Scooby's birthday at home including custom party invites, Scooby-approved munchies recipes, Mystery Gang and Monster masks, Scooby-Doo Bingo, coloring pages, and a DIY popcorn box—complete with a special screening of your favorite Scooby episodes or movie.

For more information, visit the 50 Days of Scooby site at www.scoobydoo.com/50daysofscooby when the countdown officially launches on July 26, 2019.

About Warner Bros. Consumer Products
Warner Bros. Consumer Products (WBCP), a Warner Bros. Entertainment Company, extends the Studio's powerful portfolio of entertainment brands and franchises into the lives of fans around the world.  WBCP partners with best-in-class licensees globally on an award-winning range of toys, fashion, home décor, and publishing inspired by franchises and properties such as DC, the Wizarding World, Looney Tunes and Hanna-Barbera. The division's successful global themed entertainment business includes groundbreaking experiences such as The Wizarding World of Harry Potter and Warner Bros. World Abu Dhabi (opening 2018). With innovative global licensing and merchandising programs, retail initiatives, promotional partnerships and themed experiences, WBCP is one of the leading licensing and retail merchandising organizations in the world.

Free Your Creativity & Power-Up Your Play With tori