LAKE BUENA VISTA, Fla., Aug. 28, 2019 — (PRNewswire) —  This will be a day long remembered at Disney's Hollywood Studios, as the park took its first step into a larger world with the grand opening of Star Wars: Galaxy's Edge. Bob Chapek, chairman of Disney Parks, Experiences and Products, was flanked by the mighty Chewbacca and other Star Wars characters Wednesday morning as fireworks exploded overhead during the land's dedication ceremony. Star Wars: Galaxy's Edge officially opens to the public Thursday, Aug. 29, 2019. 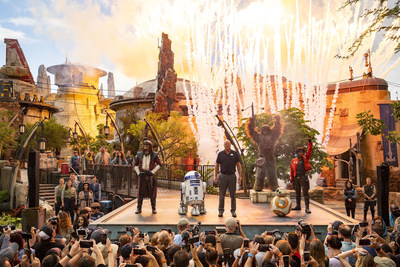 "With the opening of Star Wars: Galaxy's Edge, we've set a new standard for the most immersive storytelling in the galaxy," said Bob Chapek, chairman of Disney Parks, Experiences and Products. "Every experience in Batuu – from piloting the Millennium Falcon to building your own droid – puts guests deeper into their own Star Wars story."

Star Wars: Galaxy's Edge, which opened at Disneyland Park in California on May 31, 2019, is the largest and most technologically advanced single-themed land expansion ever in a Disney park. The 14-acre land transports guests to the remote planet of Batuu, full of unique sights, sounds, smells and tastes.

Guests become part of their own Star Wars stories as they experience galactic food and beverages, such as iconic Blue Milk and Green Milk. They can craft their own lightsabers or build their own droids in immersive, interactive retail experiences. They can explore an intriguing collection of merchant shops and may even come across iconic Star Wars characters.

In one of the land's signature attractions, Millennium Falcon: Smugglers Run, guests take the controls of the most famous ship in the galaxy as pilots, gunners or flight engineers in an exhilarating experience that responds in real time to the actions they take. A second anchor attraction, Star Wars: Rise of the Resistance, will debut Dec. 5, 2019, at Disney's Hollywood Studios and Jan. 17, 2020, at Disneyland. In the most ambitious, immersive and advanced attraction ever imagined, guests will become part of the action during a climactic battle between the First Order and the Resistance in an experience that will blur the lines between fantasy and reality.

The new land builds off decades of collaboration between Walt Disney Imagineering and Lucasfilm Ltd., a global leader in film, television and digital entertainment production, including the Star Wars franchise. The work on Star Wars between these two creative powerhouses dates back to 1987, when the groundbreaking Star Tours attraction opened at Disneyland Park in California.

Hitachi Vantara Joins Strategic Alliance with Disney Parks, Helping Usher in the Next Generation of Ride and Show Analytics