Moviegoers Can Discover the Story of Dignity, Determination and Compassion That Has Audiences Standing Up and Cheering at Film Festivals Around the World

DENVER, Sept. 5, 2019 — (PRNewswire) — On the heels of a successful festival run, the acclaimed documentary "Skid Row Marathon" will debut in more than 700 cinemas nationwide for a one-day event on Monday, October 14 at 7:00 p.m. local time. The film follows criminal court judge Craig Mitchell, who starts a running club on Los Angeles' notorious skid row and begins training a motley group of former addicts and criminals to run marathons as they fight to pull themselves out of homelessness and addiction. "Skid Row Marathon," which tells a story of hope, friendship and dignity, has won 23 festival awards across the country and around the world. Screenings in all locations will be concluded with a special follow up piece featuring Judge Mitchell journey, discussing where his running club is now. 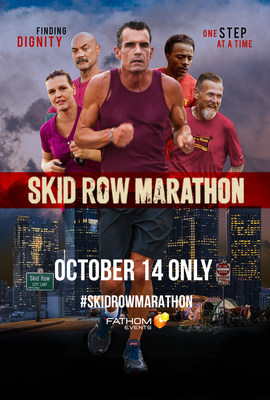 Tickets for "Skid Row Marathon" can be purchased online beginning Friday, August 30 at www.FathomEvents.com and participating theater box offices. A complete list of theaters will be available August 30 at the Fathom Events website.

Filmmaking team Mark Hayes (writer/director) and Gabriele Hayes (producer) were inspired to document Judge Mitchell and his running club when they read a newspaper article about his uplifting story. Since they were both runners themselves they decided to join his efforts.

"Los Angeles County has over 59,000 homeless people which represents the largest concentration of homeless in America," stated Mark Hayes. "Our hope is that the powerful stories of Judge Mitchell and the members of the Skid Row Running Club we follow in the film will empower people across the nation to become part of the conversation and the eventual eradication of homelessness."

Gabriele Hayes added "We are thrilled that moviegoers across the country will be able to see 'Skid Row Marathon' and experience how one simple commitment to kindness can change lives for the better."

"Fathom is pleased to give this documentary a nationwide platform for its message and to expand our documentary offerings to cinema audiences," Fathom Events CEO Ray Nutt said. "This is a deeply inspiring film that not only offers an intimate look at Judge Mitchell's story and his impact on the members of his running club, but also provides an insightful way in to explore and understand homelessness and addiction in our country and how we can all make a difference."

For artwork/photos related to "Skid Row Marathon" visit the Fathom Events press site. To request an interview with the filmmakers or featured people in the documentary, send requests to Rebecca Fisher at Perception PR:  rebecca@perceptionpr.com.