"Moonwalk" -- a New Stop Motion Animation Short Film from HAND OF THE TRIBE, Produced by Award Winning Director Vincent Marcone, Is Out Today

BOSTON, Nov. 25, 2019 — (PRNewswire) — Today marks the world premiere of "MOONWALK" - a new thought-provoking stop-animation short film from the Boston based heavy metal band HAND OF THE TRIBE (WATCH HERE). Comprised of former members of the bands Hourcast, and Seven League Boots, this video marks the second single from the band's forthcoming album.

Teaming up with  Vincent Marcone - A Juno Award winning Canadian illustrator, film director, and curator of  My Pet Skeleton - the  "MOONWALK" video was inspired by, and calls attention to the ever-growing crisis of E-waste. The depiction of the character ARC - the animated owl in the video - reckons with the loss of his wings, now rendered useless by the weight of electronic waste. Symbolically, he is able to resurrect them by reconnecting with nature, and the consciousness of the living man.

"Our music video took shape after reading about one of the most toxic landscapes in the world, a digital landfill in Africa known as Agbogbloshie. In essence, " Moonwalk" is a modern-day fairytale about a "burner boy" in Ghana who is confronted by a strange kind of spirit animal as he harvests copper from electronic waste. The synopsis is, that perhaps it's time we get our world house in order by waking up to this truth," says director  Vincent Marcone.

"Laptops, phones, computers…where do they all end up?" asks drummer Jerry Clews. This is the question the band asked themselves when contemplating the subject matter for this video. Clews goes on to say "I think it's something like 800 laptops a minute that are disposed of globally, that are then shipped off to be 'recycled' in countries like Asia and Africa. The tech waste is dumped into landfills and burned. The release of heavy metals and dioxins pollute the air, water and soil and make community sustainability nearly impossible. We felt it was important to bring this crisis, and the devastation it imparts on all living beings and the planet, to the forefront."

The metaphor for the MOONWALK video - while purposefully intense in its messaging - also conjures fan participation with the creation of the custom Augmented Reality Owl face filter of ARC. Created by Casie Millhouse-Singh and her company Two Lane Social, this exclusively designed Facebook Filter will allow fans to take pictures with, post, interact, share, and create videos using the filter on their own photos. Exclusive to HAND OF THE TRIBE, the Arc owl Face Filter will debut on December 9th.

"Making this video is not just an expression of the music we write, but of the vision we have for the world. Hopefully, the story of ARC will effectively convey the message we are trying to get across," says lead vocalist and guitarist Dave Henriquez.

HAND OF THE TRIBE fans are encouraged to support the band, and their environmental cause with innovative, interactive participation! Each use of MOONWALK's Arc Face Filter presents creative and engaging opportunities to access new fans, while utilizing a truly fun and unique way to drive home awareness of E-waste across social media platforms.

HAND OF THE TRIBE will also be donating a portion of the proceeds from the MOONWALK single to nonprofits fighting Global Electronic Waste.

HAND OF THE TRIBE members Dave Henriquez (vocals and guitar),  Jerry Clews (drums) and Rich Feins (bass) made their debut onto the Boston music scene in late September, receiving rave reviews for their first single 'The Last Time'. Their combined musical tenure includes tours with bands such as Godsmack, Puddle of Mud, Volbeat and Thirty Seconds To Mars. They are currently finishing up their full-length album, with a 2020 tour to follow.

For more information on HAND OF THE TRIBE contact: 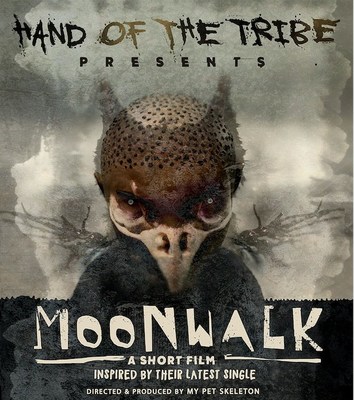 SOURCE HAND OF THE TRIBE