- A month from the announcement of the Theatrical Anime Film project. A new project will additionally launch

TOKYO, Dec. 25, 2019 — (PRNewswire) — PONY CANYON (Head Office: Minato-ku, Tokyo / President: Takashi Yoshimura) announced that the Artist to sing the theme song for the currently in-production film "DEEMO THE MOVIE" (music/lyrics by Yuki Kajiura) will be decided through a public audition. 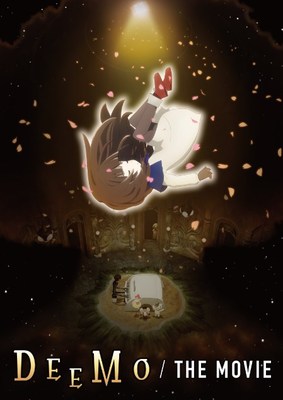 The audition will accept applicants from both Japan and abroad, and the winner will be guaranteed with a debut release of the Film's theme song from Pony Canyon.

Applications to the audition can be submitted using the KARASTA app (mixi) in Japan, while over-seas applications can be made through YouTube and bilibili.

Additionally, fan (viewer) votes will be counted in addition to professional judge votes in deciding the qualifiers beyond the 2nd round of auditions.

Objective of the audition:

To discover a new talent with outstanding singing skills who would be suitable to sing the theme song for "DEEMO THE MOVIE", an Anime Film that pursues high music qualities in accordance with the original story (world-renowned music game "DEEMO").

Visit the "DEEMO THE MOVIE" official website for more details about the audition: https://deemomovie.jp/utahime

-Download the KARASTA app and upload your performance of the assignment song.

Upload your performance of the assignment song with the following 2 hashtags:

Song to apply with

Assignment song: "inside a dream" (song featured in DEEMO THE MOVIE). Music/Lyrics by Yuki Kajiura. Song by Joelle.

*The original song is performed in words coined by Yuki Kajiura, but applicants are free to change the lyrics. Humming is accepted as well.

1.  Must be female aged 13 or older.
2.  Must not be signed with and/or represented by any record label, management or agency/agent.
3.  Applicants under the age of 20 must be authorized by their parent/guardian before applying.
4.  Must be able to participate in screenings beyond the second round that will be held in Japan.
5.  Must understand and approve that photographs/videos will be taken beyond the 2nd round of auditions.
6.  The winner of the audition must base her activities in Japan and participate in the domestic entertainment industry.

March – June 2020
2nd round > 3rd round > Final round
On top of votes by professional judges Yuki Kajiura, Yasuhiro Mori (the film's music producer), and Pony Canyon's producers, public fan votes will be added, and the total score will determine the qualifiers for these rounds.

Results
The grand winner of the audition will be announced on July 2020 at ANIME EXPO in L.A.

DEEMO is a SmartPhone rhythm game app that has had over 23 million downloads worldwide. DEEMO -Reborn-, both its downloadable and packaged software for PlayStation4, will be released on November 21.

DEEMO, a rhythm video game inspired by the musical instrument of piano, carries approximately 200 songs of a wide variety, from beautiful classical music to rock, jazz, and electronic. It offers innovative entertainment to the players who must tap the notes on the screen like playing the piano, and in addition to its collection of superlative music, the smoothness of gameplay is unrivaled by any other game app, which have captivated many music game fans in Asia and around the world.

Alone in a castle, a figure plays a piano... Deemo

One day, a girl with no memory falls from the sky.

A gentle story that will touch your heart

DEEMO: the rhythm game cherished around the world. NOW, adapted for animated film

Based on the original story "DEEMO" by Rayark Inc.

Pony Canyon has long been a leading supplier of animation across the world. We are involved in every stage of content creation – from the planning through the co-production and finally, its distribution. As fans ourselves, we are able to cultivate animation that comes to be loved by fans across the world – just a few include "Attack on Titan"," Sound! Euphonium" and "Kengan Ashura". Fathom Events Celebrates 700th Anniversary of Scotland's Fight for Independence With Best Picture Oscar®-Winner 'Braveheart' and the U.S. Premiere of 'Robert the Bruce'

Disneyland Resort Announces Limited-Time Ticket Offers for Kids Everywhere and Southern California Residents, for as Low as $67 Per Person Per Day with 3-Day, 1-Park Per Day Tickets