DENVER, Jan. 9, 2020 — (PRNewswire) —  GKIDS, the acclaimed distributor of multiple Academy Award®-nominated animated features, and Fathom Events announced today that "Tokyo Godfathers," the critically-acclaimed animated feature from director Satoshi Kon ("Perfect Blue," "Paprika"), will return to theaters in a new 4K restoration this March. GKIDS previously re-released a remastered version of Satoshi Kon's groundbreaking psychological thriller "Perfect Blue" in 2018 in partnership with Fathom Events. ASIFA-Hollywood recently announced that Kon would posthumously receive the Winsor McCay Award, the organization's award for lifetime achievement in animation, at their upcoming 2020 Annie Awards ceremony, and a new stage play based on "Tokyo Godfathers" has just been announced by the New National Theatre, Tokyo, to be performed during the theater's 2020-21 season. 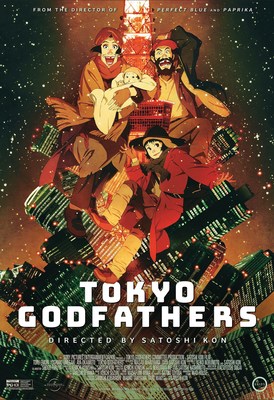 Beginning on Friday, January 31 tickets for "Tokyo Godfathers" will be available at www.FathomEvents.com, www.TokyoGodfathersMovie.com and participating theater box offices.

GKIDS and Fathom Events will present "Tokyo Godfathers" in select movie theaters across the U.S. on Monday, March 9 at 7:00 p.m. (local time, English-language subtitled) and Wednesday, March 11 at 7:00 p.m. (local time, English-language dubbed). For a complete list of theater locations, visit the Fathom Events website (theaters and participants are subject to change).

In modern-day Tokyo, three homeless people's lives are changed forever when they discover a baby girl at a garbage dump on Christmas Eve. As the New Year fast approaches, these three forgotten members of society band together to solve the mystery of the abandoned child and the fate of her parents. Along the way, encounters with seemingly unrelated events and people force them to confront their own haunted pasts, as they learn to face their future, together.

"We are pleased to partner with GKIDS to bring this wonderful re-release to American cinemas," said Fathom Events CEO Ray Nutt. "Anime fans nationwide will once again be able to enjoy the brilliant work of Satoshi Kon in their local theaters among likeminded audiences."

About GKIDS
GKIDS is a producer and distributor of award-winning feature animation for both adult and family audiences. Since 2010, the company has scored an astounding 11 Best Animated Feature Oscar nominations with The Secret of Kells in 2010, A Cat in Paris and Chico & Rita in 2012, Ernest & Celestine in 2014, The Tale of The Princess Kaguya and Song of the Sea in 2015, Boy and the World and When Marnie Was There in 2016, My Life as a Zucchini in 2017, The Breadwinner in 2018, and Mirai in 2019.  GKIDS also handles North American distribution for the famed Studio Ghibli library of films, one of the world's most coveted animation collections with titles Spirited Away, My Neighbor Totoro, Princess Mononoke and others. GKIDS also produces the annual LA-based film festival, ANIMATION IS FILM, which embraces the highest aspirations of animation as a cinematic art form and is a vocal advocate for filmmakers who push the boundaries of their work to the fullest range of expression of which medium is capable. www.gkids.com