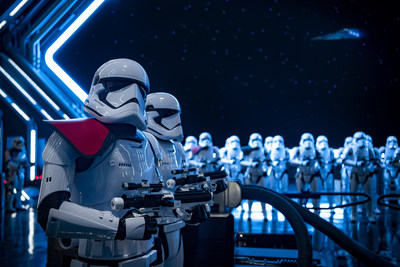 As the largest single-themed land expansion in Disney history, Star Wars: Galaxy's Edge is already proving wildly popular by inviting guests to live their own Star Wars adventures in a galaxy far, far away. They join a climactic battle between the Resistance and the First Order in Star Wars: Rise of the Resistance and take control of the most famous ship in the galaxy aboard Millennium Falcon: Smugglers Run. And while exploring this expansive new 14-acre land, they can sample galactic food and drink, enter an intriguing collection of merchant shops and encounter some of their favorite Star Wars characters, including the resourceful and loyal astromech droid R2-D2.

"Star Wars: Rise of the Resistance is epic, immersive storytelling on a massive scale—and our Imagineers have created an attraction that sets a new bar for theme park experiences," said Bob Chapek, chairman of Disney Parks, Experiences and Products. "Star Wars: Rise of the Resistance puts guests at the heart of their very own Star Wars adventure, and is the most advanced, action-packed attraction Disney has ever created."

Star Wars: Galaxy's Edge, which also appears at Walt Disney World Resort in Florida, has been recognized by several prestigious organizations for excellence in design and execution:

These accolades speak to an entirely new kind of Disney experience happening every day inside Star Wars: Galaxy's Edge. And now the next grand chapter in this story is about to unfold with the debut of Star Wars: Rise of the Resistance.

Welcome to the Edge of Wild Space: Black Spire Outpost on Batuu
Star Wars: Galaxy's Edge builds off decades of collaboration between Walt Disney Imagineering and Lucasfilm Ltd., a global leader in film, television and digital entertainment production, including the Star Wars franchise. The work on Star Wars between these two creative powerhouses dates back to 1987, when the original Star Tours attraction opened at Disneyland.

They came together once again for Star Wars: Galaxy's Edge, transporting guests to the remote planet Batuu, a new location in a story that began in 1977 with the first Star Wars film. It is a far-flung destination along the galaxy's Outer Rim, on the frontier of Wild Space – the uncharted region beyond all known star systems. The planet is home to Black Spire Outpost, an infamous port for smugglers, traders and adventurers wishing to avoid any unnecessary … entanglements with the First Order.

When guests arrive on Batuu, they come across aliens, droids and other inhabitants of this planet as they search for rare and unique goods, discover unusual food and drink, or join a crew seeking adventures. Along the way, guests may encounter some familiar faces, including Rey, Chewbacca or even Supreme Leader Kylo Ren and his Stormtroopers.

Star Wars Adventures Come to Life in Two Thrilling Attractions
For more than four decades, fans of Star Wars films have imagined what it would be like to race through the halls of a Star Destroyer or blast across the stars inside the Millennium Falcon. Star Wars: Galaxy's Edge features two signature attractions that turn those dreams into reality.

Star Wars: Rise of the Resistance brings guests into the middle of a climactic battle between the First Order and the Resistance, including a faceoff with Kylo Ren. The journey takes guests aboard a full-size transport shuttle and then into a nearby Star Destroyer on a thrilling adventure that blurs the lines between fantasy and reality. One of the most immersive, ambitious and technologically advanced experiences in Disney history, the attraction uses multiple ride systems working together to create a seamless story on a cinematic scale. Star Wars: Rise of the Resistance opened Jan. 17, 2020, at Disneyland Park in California, and opened in December 2019 at Disney's Hollywood Studios in Florida. A virtual queue* for the new attraction is available at Disneyland Park. Guests must be inside Disneyland Park with their tickets scanned to obtain a boarding group in the virtual queue. Guests can learn more about the virtual queue at Disneyland.com.

In Millennium Falcon: Smugglers Run, guests climb into the cockpit of "the fastest hunk of junk in the galaxy" for their own Star Wars adventures. They take the controls of the Falcon in one of three unique and critical roles as the ship hurtles through space. Some are pilots, some gunners and some engineers, creating multiple ways for guests to engage with the attraction in an experience that responds in real time to the actions they take.

A Diverse Menu of Food and Beverages Await
What does Blue Milk or Green Milk actually taste like? That question and more is answered when guests visit Star Wars: Galaxy's Edge and experience the new land's expansive array of food and beverages. Vendors offer various local favorites such as an Outpost Mix of flavored popped grains from Kat Saka's Kettle, a unique popcorn snack with a combination of sweet, savory and spicy flavors.

At Oga's Cantina,** even the blaster-bolt scorches on the walls tell a story. Here, guests gather to share their tales from around the galaxy as they enjoy exotic beverages served in unique vessels and listen to spirited musical entertainment provided by DJ R-3X, otherwise known as Rex, the former Starspeeder 3000 pilot droid from the original Star Tours. Rex re-invents himself as the cantina's DJ, and he's as quirky and talkative as ever.

Outlook on the World's Animation & VFX Markets, 2020-2025 - Streaming Video is the Fastest-Growing Distribution Channel for Animation and is Witnessing Double-Digit Growth