LOS ANGELES, Aug. 7, 2020 — (PRNewswire) —  A new video depicting Donald Trump performing a song in praise of his son-in-law, Jared Kushner, is today revealed as being the work of The Simpsons and Spinal Tap star Harry Shearer. Son in Law, which premiered on YouTube, is the first track to be released in a cycle of satirical songs inspired by the last four years of US politics and in particular the often mercurial behaviour of the current occupant of The White House. A new song will be released each week throughout the summer and autumn. 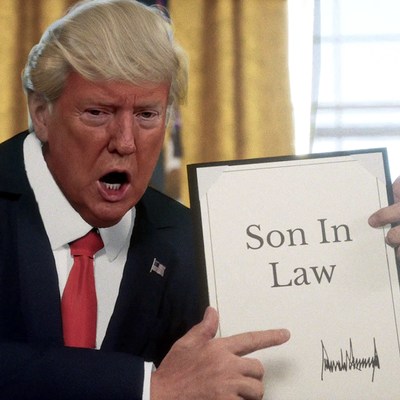 The "Son In Law" video uses groundbreaking motion-capture animation to portray the US President lionizing his senior advisor and husband of his daughter Ivanka.  At one point it shows the spookily real Trump with his hand casually hovering over the nuclear button on his desk in The Oval Office, whilst extolling the virtues of his daughter's curves.

Harry Shearer says, "You can't fire family, but you can sing about them."

COVID-180, out today, is the second song in the series and has Shearer as the Leader of The Free World as he dances to his own tune in a dizzying reality-distanced spin away from the virus that has swept the world.

Written by Shearer, the old-style New Orleans R&B song has The Simpsons star on vocals in an eerily accurate impersonation of the President of The United States.  He is joined by a band of top New Orleans musicians who include David Torkanowsky of The Astral Project and Stanton Moore Trio on piano and organ, The Metres star George Porter, Jr. on bass, Raymond Weber of Dumpstaphunk on drums, leading saxophonist Brad Walker, Scott Frock of Delfeayo Marsalis' Uptown Jazz Orchestra, on trumpet, and one of New Orleans' top trombonists Jon Ramm.  The track is mixed by long-time Harry Shearer musical collaborator C J Vanston at The Treehouse North Hollywood and produced by David Torkanowsky.  It was recorded in New Orleans and Los Angeles.

Harry Shearer has vocally portrayed every US president of his lifetime.  Donald Trump is the third he has portrayed physically, having previously played Richard Nixon and Ronald Reagan on screen.

﻿The video was conceived and produced by Harry Shearer with Matt Hermans of The Electric Lens Company in Sydney, Australia. The On Set Producer was Harry's long-time collaborator, cinematographer Matthew Mindlin.