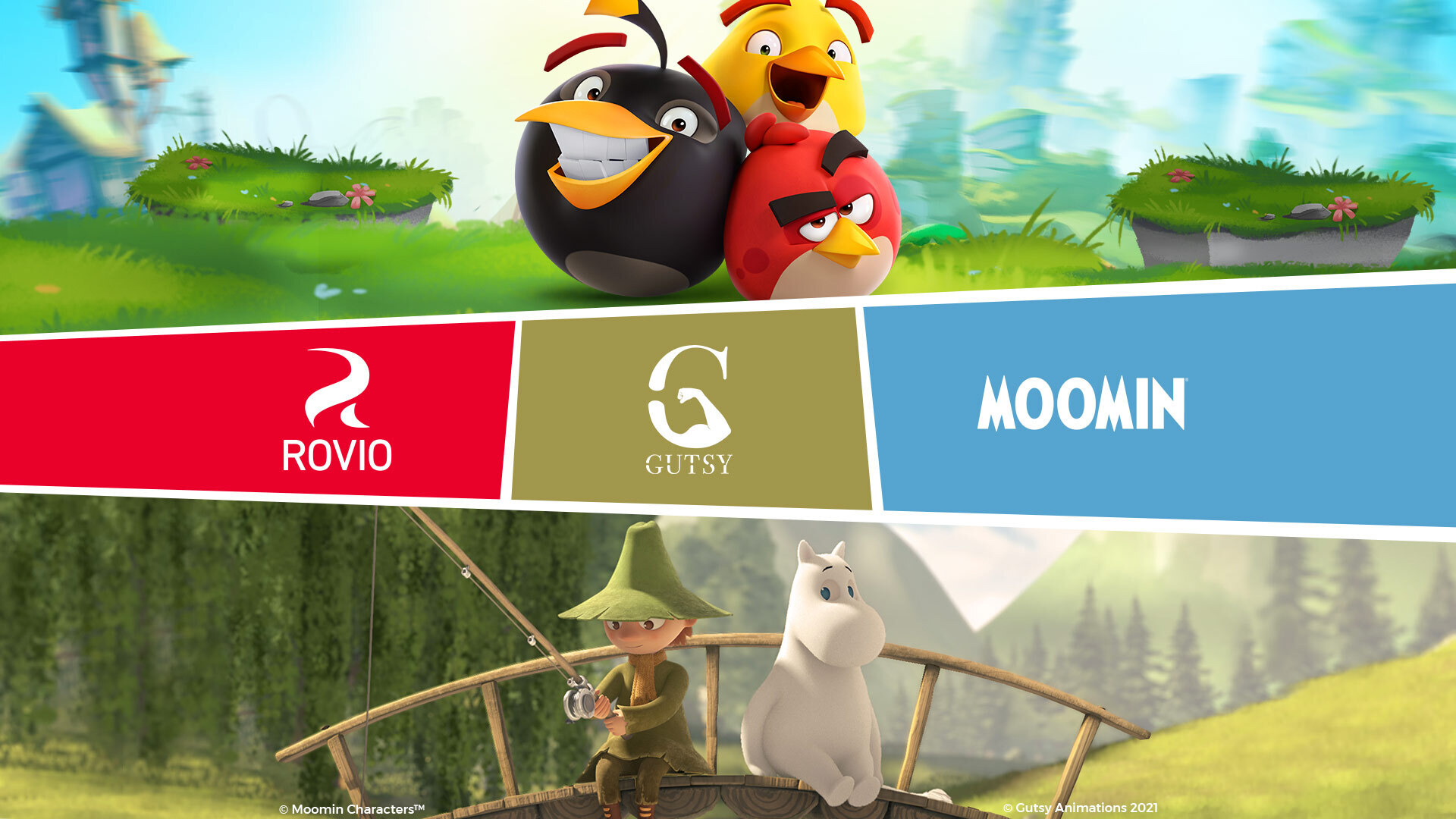 ESPOO - Finland, June 21, 2021- Rovio Entertainment Corporation, the creator of Angry Birds, has entered into a long-term partnership with Moomin Characters and Gutsy Animation. Rovio will have the rights to develop and publish Moomin IP based games for any platform, with exclusive rights for all mobile platforms. Rovio will also become a minority shareholder in Gutsy Animations, the creator of the Moominvalley 3D animation series through an equity investment of 2.5 million euros and a convertible loan of 2.5 million euros.

Moomin has a very high brand awareness particularly in Japan, which is one of the biggest gaming markets in the world. The length of the partnership is six years, with a possible extension for another six years.

‘’Gutsy Animations did an astonishing job at bringing to life the rich stories and alluring atmosphere of the Moominvalley. We are honoured and excited to enter this partnership with Moomin Characters and Gutsy Animations. Working with Gutsy and Moomin will give us the opportunity to present this iconic brand to new audiences across the globe at the same time as we surely will delight our existing fans.’’ says Alex Pelletier-Normand, Rovio CEO. ‘’This partnership will diversify our IP portfolio, which is a key step in our consistent growth strategy. Rovio’s first Moomin game, based on the original story and world created by Tove Jansson, and inspired by the Moominvalley visuals, is already being developed and we expect it to reach soft launch later this year.‘’

Roleff Kråkström, Managing Director of Moomin Characters, says: “As Moomin Characters looks to expand their digital footprint and offering, it’s fantastic to join forces with Rovio Entertainment, who bring a wealth of expertise and success in this space. We’re confident this partnership will open up new opportunities not only to the Moomin trademark, but also to the additional Nordic story. This partnership marks an important milestone in our strategy to take local Nordic creations to the international marketplace.’’

Marika Makaroff, Founder and CCO of Gutsy Animations, says: “I’m thrilled to have Rovio joining us and bolstering our efforts to create meaningful international content that leans into Nordic values. This investment shows growth does not always need to come from far afield and is an incredible display of confidence in Gutsy Animations’ ability to create high quality, distinctive content for the global market. Additionally, by forging a collaboration between three Finland-based companies, this partnership shows a high level of trust in Finnish know-how, highlighting the power of storytelling through shared values. Through this investment, we’ll have a valuable opportunity to continue writing Finnish success stories across the worlds of both entertainment and culture, which follow in the footsteps of our celebrated, Emmy® Award-nominated adaptation of the original Moomin stories, Moominvalley”.

For Rovio:
Interview requests for CEO can be directed to Lotta Backlund, Head of Communications & PR
Tel: +358 40 531 3076
lotta.backlund@rovio.com

Rovio Entertainment Corporation is a global, mobile-first games company that creates, develops and publishes mobile games, which have been downloaded over 4.5 billion times so far. Rovio is best known for the global Angry Birds brand, which started as a popular mobile game in 2009, and has since evolved from games to various entertainment and consumer products in brand licensing. Today, Rovio offers multiple mobile games, animations and produced The Angry Birds Movie in 2016. Its sequel, The Angry Birds Movie 2, was released in 2019. Rovio is headquartered in Finland and the company's shares are listed on the main list of NASDAQ Helsinki stock exchange with the trading code ROVIO. ( www.rovio.com)

About Gutsy Animations
A Finnish production house Gutsy Animations believes that the world is in need of kind, clever, meaningful, and gutsy content for global audiences. The flagship production, Moominvalley TV series, is an International Emmy® Award -nominee and has a record-high 16 million starts on Yle’s streaming platform in Finland. Moominvalley won the Golden Venla for the Best Children and Youth Programme on two consecutive years – in 2019 and again in 2020. The production company, founded by awarded creator Marika Makaroff in 2016, leans on the best creatives around the world in the production.
www.gutsy.fi

About Moomin Characters
Moomin Characters Oy Ltd is the official copyright holder of all the Moomin characters. All characters from Moominvalley are trademark registered worldwide. The Moomins are central characters in a series of books and comic strips written by Finnish-Swedish writer and artist Tove Jansson between 1945 and 1980. They are one of Finland’s biggest exports and have a global fan base. The company was founded in the 1950’s by Tove Jansson (1914-2001) and her brother Lars Jansson to take care of the copyright of the Moomins and is still run by family members. Rights and Brands is the worldwide licensing agent of the company.

Unveiled at Anime Expo Lite 2021, Ayane Sakura and Akari Kito will appear in "DEEMO THE MOVIE"

Vancouver Film School to Step-out on the Red Carpet [in Cannes], in Support of Diversity and Inclusivity in the Film Industry