TALLINN, Estonia, June 24, 2021 — (PRNewswire) — Ready Player Me, a cross-game avatar platform used by over 200 developers, including VRChat, LIV, and Somnium Space, today announced the launch of its Koji Link in Bio app. The Ready Player Me app brings Wolf3D's innovative selfie-based avatar creation to Koji users, and provides a way to render and authenticate digital avatars directly on Koji Link in Bios. 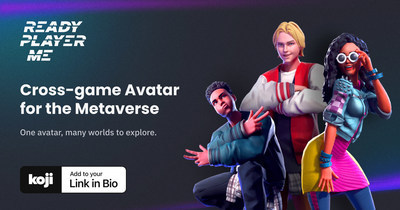 "Personal 3D avatars are not just for gamers. As more and more of our day-to-day lives take place digitally, our virtual representations take on increasing importance. We believe that launching our app on Koji furthers the ultimate convergence of the creator economy, the Metaverse, and adjacent technologies like NFTs and blockchain gaming," said Timmu Tõke, Wolf3D CEO.

Creating and maintaining a consistent identity is top of mind for today's creators and influencers, most of whom produce content across a variety of platforms. The Ready Player Me app adds a new dimension to the Link in Bio by giving Koji users a way to create and associate their digital avatars with their other Koji apps and links.

"The Koji Link in Bio is an identity layer that is decoupled from any individual social media network, which is a necessity for the modern multi-platform creator. The Ready Player Me app introduces new ways of thinking about identity and presence across digital spaces in a way that shifts power to creators instead of platforms," said Grant Long, Head of Growth at Koji.

Koji creators can install the app to their Link In Bio and create their full-body 3D avatars, starting with a selfie and then customizing their avatars with over 300 options. Once they are happy with the configuration, the creator then saves the avatar, which is publicly visible in a viewer app on their Link In Bio. When creators play one of more than 200 games or interactive experiences that integrate with the Ready Player Me platform, their avatar is automatically available as their playable character. The avatar is highly customizable and skinnable, including with exclusive NFT-based items.

The Ready Player Me app is available today on the Koji App Store and is free to use.

ABOUT WOLF3D AND READY PLAYER ME
Wolf3D was founded in 2014 and has been developing selfie-based digital avatar technology for the past seven years with a mission to power the next generation of online identities. In 2020, Wolf3D launched the Ready Player Me avatar creator for developers, kick-starting the company's track record in becoming the avatar identity standard for the Metaverse.

Backed by U.S. and European investors like Rovio's Peter Vesterbacka, Wolf3D has raised $3.7 million. It currently employs 30 people in 10 countries, and with 40% MoM partner growth, it is on track to raise a Series A in 2021.

ABOUT KOJI
Koji is the world's most powerful Link in Bio platform. With hundreds of free apps created by Koji and its community of independent developers, the Koji Link in Bio gives leading Creators on TikTok, Instagram, Twitch, and other social media platforms new ways to engage audiences, connect with supporters, and monetize. Koji launched in March 2021 and has raised $16 million in venture capital through its parent company GoMeta, Inc.