Ethnic E-Grocer Weee! Teams Up with Disney and Pixar to celebrate the new movie, "Turning Red"
FREMONT, Calif., March 15, 2022 — (PRNewswire) — Weee! ( www.sayweee.com), the largest and fastest-growing ethnic e-grocer in North America, today announced it has teamed up with Disney and Pixar to create recipes inspired by the movie " Turning Red." Additionally, Weee!'s new Chief Creative Officer, Jon M. Chu, sits down with the movie's director, Academy Award® winner Domee Shi (known for her Pixar short "Bao"), to talk about her favorite foods from childhood, what she eats when she's stressed, and her journey as a director, from being the first woman of color to win the Academy Award® for Best Animated Short Film, to directing "Turning Red," her debut feature film. 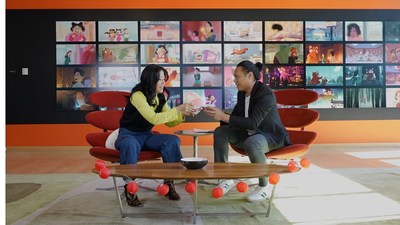 "Turning Red" (PG) is an animated coming-of-age fantasy comedy film that champions the story of a teenage girl, Meilin "Mei" Lee, who is navigating the expectation to remain her mother's dutiful daughter during the chaos of adolescence. Her protective, if not slightly overbearing mother, Ming (voice of Sandra Oh), is never far from her daughter—an unfortunate reality for the teenager. And as if changes to her interests, relationships, and body weren't enough, whenever she gets too excited (which is practically ALWAYS), she "poofs" into a giant red panda! "Turning Red" streams exclusively on Disney+ on March 11, 2022.

To learn more about Domee Shi's personal story and inspiration, Jon M. Chu, an acclaimed filmmaker himself ("Crazy Rich Asians" and "In the Heights"), sits down with her to discuss favorite foods and snacks at Pixar's campus in an interview that's available on Weee!'s YouTube channel, as well as live on Weee!'s app.

To give fans an opportunity to recreate the meals from "Turning Red" (PG) in their own homes, Weee! collaborated with Pixar to create three recipes inspired by the movie. From Meilin Lee Smiley-Face Congee, to Mom's After School Bao, to Dad's Famous Stir-Fry, fans who want to try these recipes can purchase all needed ingredients directly from Weee!, and create culinary memories at home that add another dimension to the movie experience. Weee! is also the ultimate snacking destination for hard-to-find treats that the entire family can enjoy.

"Weee! is thrilled to team up with Pixar to celebrate "Turning Red," said Jon M. Chu, Chief Creative Officer at Weee!. "It is exciting to see Asian food and culture represented in such a creative and inspiring way. We are happy to be able to bring the experience off the screen and into people's homes through heart-warming recipes and the inspiring interview with director Domee Shi, the first Asian woman to direct a Pixar movie. We believe in the power of telling stories around how people share food, celebrate traditions, and experience culture and appreciate the opportunity to work with others that share that passion such as Pixar."

About Weee! Inc.
Weee! is the leading Asian and Hispanic e-grocer in the U.S., delivering more than 10,000 locally sourced and hard-to-find goods from around the globe directly to customers. Founded in 2015 and headquartered in Fremont, California, Weee! is on a mission to enable affordable access to groceries for every home in North America while setting a new standard for freshness and value. By leveraging social e-commerce and proprietary forecasting technology, the company continues to redefine online grocery shopping. Since its inception, Weee! has received $835M+ in funding from Arena Holdings, Blackstone, DST Global,Goodwater Capital, Greystone Capital, iFly.vc, Lightspeed Ventures, SoftBank Vision Fund 2, Tiger Global, VMG, and XVC.

About Disney and Pixar's Turning Red:
Disney and Pixar's "Turning Red" introduces Mei Lee (voice of Rosalie Chiang), a confident, dorky teenager torn between staying her mother's dutiful daughter and the chaos of adolescence. Her protective, if not slightly overbearing mother, Ming (voice of Sandra Oh), is never far from her daughter—an unfortunate reality for the teenager. And as if changes to her interests, relationships and body weren't enough, whenever she gets too excited (which is practically ALWAYS), she "poofs" into a giant red panda! Directed by Academy Award® winner Domee Shi (Pixar short "Bao") and produced by Lindsey Collins "Turning Red" releases on Disney+ on March 11, 2022. Disney+ Subscription Required. Must be 18+ to subscribe.

BEST ANIMATED FEATURE GOES TO 'THE MILLERS vs THE MACHINES'

No Such Thing as Too Much Fun: Disney Wish Will Deliver Endless Entertainment for Families to Delight in Disney Storytelling Together