July 30, 2009— Germany's 50 largest cities are responsible for around half of the nationwide turnover related to women's, men's and children's outer garments, according to the results of a study by GfK GeoMarketing. The study demonstrates that turnover in these cities far exceeds the local purchasing power for clothing. According to GfK retail expert Olaf Petersen, this is a sign that city centers continue to exert a substantial retail draw with regard to clothing sales.

GfK GeoMarketing has completed and released its GfK POS Turnover for Clothing 2009 study. The study reveals the regional distribution of turnover related to clothing sales, calculated at the point of sale. GfK GeoMarketing releases this study every two years. Predictably, regions with large populations generate a high level of clothing-related turnover. Even so, the significantly elevated level of turnover in some cities is striking and indicates that these locations draw a large number of shoppers from the surrounding regions.

While it's generally the case that higher numbers of inhabitants equate to higher clothing-related turnover, this isn't always true: Some locations with lower numbers of inhabitants generate more turnover than metropolitan areas with far larger populations. For example, Mannheim, despite a population of only around 310,000, generates more turnover in the clothing sector than the much larger cities of Essen, Leipzig and Dresden, all of which have populations exceeding 500,000. 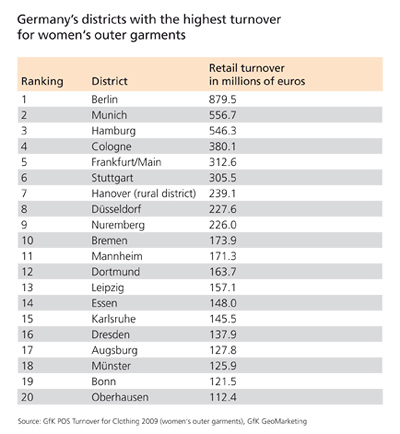 These differences are due to the fact that metropolitan regions have varying levels of retail draw with regard to the surrounding population. "The so-called retail centrality is an additional important factor in evaluating clothing-related sales at a given location," explains Petersen. "Our many years of experience as consultants have also shown us that many location-related criteria play a role in how well a given location performs. It's absolutely essential to determine the total possible potential for a given location in order to survive in the fast-paced clothing sector."

"Our results show that the clothing trade is an important pacesetter for the retail draw of city centers," continues Petersen. "But by the same token, clothing retailers profit from the drawing power of locations with a wide selection and range of non-clothing product types."

The established preference for shopping in larger cities is also due to the fact that a significant number of places with an above average level of purchasing power – e.g., the rural district of Starnberg in Bavaria – make the list of the 20 regions with the lowest clothing-related turnover. "This reflects the fact that the affluent inhabitants of Starnberg tend to travel for their shopping needs rather than spending money locally. Nearby Munich is a popular destination as well as locations abroad," Petersen explains.

Shopping centers can drive shopping tourism
The GfK study shows that in addition to city centers, other shopping destinations can play a significant role in the retail clothing sector. The turnover generated in the urban district of Oberhausen is a case in point. Oberhausen is the only shopping destination in the top 20 with fewer than 250,000 inhabitants. The key reason behind this impressive performance is Oberhausen's "CentrO" – a massive shopping and leisure center conceived as the city's "new center" that attracts an average of 70,000 visitors each day. "CentrO catapults the total turnover for Oberhausen into the top range and lends the location a very high retail drawing power," explains Petersen. "Such centers are big hits among customers and retailers with an eye for expansion possibilities. Even so, the appeal of this kind of development must be weighed against its disadvantages, such as its structural repercussions on city centers."

The GfK POS Turnover for Clothing study reveals the regional distribution of clothing-related turnover at the point of sale. The study differentiates between turnover generated by women's, men's and children's outer garments. Not taken into account are direct sales from manufacturers to consumers and turnover related to wholesale, grocery stores, convenience stores and mail-order retail.

The study includes data on all of Germany's municipalities with more than 40,000 inhabitants, rural and urban districts, postcode areas and federal states. The turnover figures are evaluated based on end-consumer prices and reflect 2008 demand levels. In order to produce as accurate an assessment of demand as possible, turnover generated by chains and corporations is accounted for at the respective branch locations.

The GfK POS Turnover for Clothing study is an important indicator of the economic attractiveness of a given location. As such, it is an indispensable resource for planning new locations and managing external sales forces. Companies can also use the dataset to pinpoint the most promising point-of-sale locations in which to concentrate their marketing and sales efforts.

Additional information on the study can be obtained from Cornelia Lichtner, public relations, GfK GeoMarketing: +49 (0)7251 9295270 or Email Contact.

GfK GeoMarketing is one of the largest providers of geomarketing services in Europe for customers and users from all branches of trade. Key business areas include:

GfK GeoMarketing is a subsidiary of the globally active GfK Group. Ranked fourth among the world's market research institutes, the GfK is represented in 100 countries with over 150 subsidiaries and 10,000 employees.