Available on DVD and Digital on January 23, 2018 Through MVD

NEW YORK, Dec. 18, 2017 — (PRNewswire) — Thirty years after he authored The Art of the Deal, Donald Trump used The Art of the Insult to brand political opponents and bash the media all the way to the White House.  Now, Trump's political strategy and hilarious antics which helped him win the White House in a stunning election upset have been documented in a compelling DVD video. Trump: The Art Of The Insult will be available January 23rd though MVD. 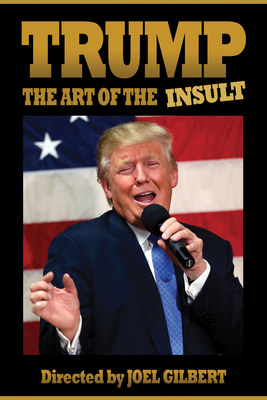 See the Trailer: TRUMP: THE ART OF THE INSULT

While critics insisted "The Donald" was merely a chaotic sideshow, Trump was dominating the 24-hour news cycle with a master plan of political incorrectness. Hurling insults like Low-Energy Jeb, Lyin' Ted, Crooked Hillary, Little Marco, Pocahontas, and Fake News, Trump emerged in 2016 as an unstoppable political phenomenon who transformed the Presidential race into the greatest show on earth. Directed by Joel Gilbert, Trump: The Art of the Insult chronicles the story of Donald Trump's improbable journey from Trump Tower to rallies across America to the debate stage, where he reveled in mocking and taunting rivals with targeted insults and nicknames, leaving them gasping for air. Not only did he push frontrunner Jeb Bush out of the Presidential race early on, Trump proved him wrong when Bush lectured during a debate "Donald, you can't insult your way to the Presidency."

Critics have called this film "The most entertaining political film ever!" and "Cinéma vérité at its finest, endlessly entertaining!"  Joel Gilbert is the director of political documentary feature films, including Dreams from My Real Father, There's No Place Like Utopia, Farewell Israel, and Atomic Jihad, as well as films on music icons Bob Dylan, Elvis Presley, and Paul McCartney.

In Trump: The Art of the Insult, the President is often sophomoric and sometimes brutal, yet always entertaining. Love or hate Donald Trump, you'll find yourself laughing along with the leader of the free world, and marveling at Trump, a marketing genius and performance artist who, despite being a Manhattan billionaire, captured the hearts of middle America.