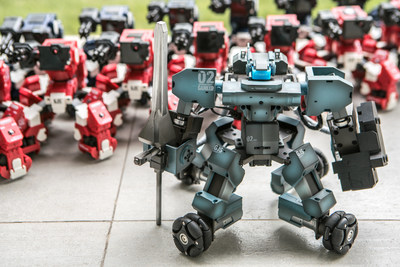 Before that, GJS had been invested by venture investment organizations such as Unity Ventures, HOFAN Venture Capital, Volcanics, etc., and by Tencent in the Series A funding in October 2017. GJS has great brand influence and growth potential in the international consumer robot industry via this investment.

Established in 2015, Shenzhen GJS Technology Co., LTD. ("GJS") is a global high-tech enterprise that integrates creation of consumer-oriented gaming robot as well as R&D, design and product sales of interactive entertainment system and robot application solutions, and is dedicated to bringing new entertainment experience to the world with robots and AI technologies.

By now, it has launched two important products, i.e., GANKER, a heavy-armored gaming robot and GEIO, a competitive gaming robot, which are suitable for various scenarios such as competitions, entertainment and STEAM education. Its products are equipped with world-leading AI visual recognition system, FPV camera, high-performance sports skeletons, electronic scoring system distributed and somatosensory control system, with the purpose of changing the operation mode of traditional toy robots and creating a face-to-face and realistic immersive gaming experience.

In the consumer gaming robot industry, GJS is leading in core technologies, patent R&D, supply chain, brand and products, and has a variety of profit models. In addition to its original "Single Product Sales + Scenario" terminal retail business, GJS also has the urban site operations enabled by high technologies and business modules such as STEAM education using Scratch for graphical programming. GJS products have attracted widespread attention around the world, and have been launched in the markets such as the United States, Canada, Japan and Russia, with fan clubs expanding to more than 20 cities in Europe, Asia and the United States.

GJS has gradually explored games, animation and events, and is committed to creating a four-in-one entertainment ecosystem consisting of consumer competitive gaming robot products, events, communities and IP culture. In 2018, GJS, gained the attention of iQiyi, a giant in the field of video entertainment, became the official partner of "Clash Bots", a mainstream robot competition program, and customized and launched two IP derivative products: GANKER and GEIO.

With abundant deposits of mecha culture, the GJS Team has a unique understanding of the market, products and future trends. Zhao Junjian, founder and CEO of GJS, is a senior mecha enthusiast. He used to work as a senior product planner for many years, responsible for the planning and expansion of various products such as online competitive games and intelligent hardware. The core team consists of several senior engineers, senior sales staffs and event operation staffs.

In recent years, with the rise of AI, the consumer intelligent robot market has been swarmed by millions of customers. The innovation and development of AI technologies such as audio-visual semantic understanding, natural language processing, neural network and emotion recognition algorithms give the robot true "Intelligence", pushing the intelligent robot products to further enter the consumer's vision and exploring new markets. According to Research and Markets, a market research institution, the market value of consumer robots is expected to exceed $5.4 billion in 2018 and reach about $15 billion by 2023.