The platform is powered by a new system-on-a-chip (SoC) called Orin, which consists of 17 billion transistors and is the result of four years of R&D investment. The Orin SoC integrates NVIDIA’s next-generation GPU architecture and Arm Hercules CPU cores, as well as new deep learning and computer vision accelerators that, in aggregate, deliver 200 trillion operations per second—nearly 7x the performance of NVIDIA’s previous generation Xavier SoC.

Orin is designed to handle the large number of applications and deep neural networks that run simultaneously in autonomous vehicles and robots, while achieving systematic safety standards such as ISO 26262 ASIL-D.

Built as a software-defined platform, DRIVE AGX Orin is developed to enable architecturally compatible platforms that scale from a Level 2 to full self-driving Level 5 vehicle, enabling OEMs to develop large-scale and complex families of software products. Since both Orin and Xavier are programmable through open CUDA and TensorRT APIs and libraries, developers can leverage their investments across multiple product generations.

“Creating a safe autonomous vehicle is perhaps society’s greatest computing challenge,” said Jensen Huang, founder and CEO of NVIDIA. “The amount of investment required to deliver autonomous vehicles has grown exponentially, and the complexity of the task requires a scalable, programmable, software-defined AI platform like Orin.”

“NVIDIA’s long-term commitment to the transportation industry, along with its innovative end-to-end platform and tools, has resulted in a vast ecosystem — virtually every company working on AVs is utilizing NVIDIA in its compute stack,” said Sam Abuelsamid, principal research analyst at Navigant Research. “Orin looks to be a significant step forward that should help enable the next great chapter in this ever improving technology story.”

The NVIDIA DRIVE AGX Orin family will include a range of configurations based on a single architecture, targeting automakers’ 2022 production timelines.

About NVIDIA
NVIDIA’s (NASDAQ: NVDA) invention of the GPU in 1999 sparked the growth of the PC gaming market, redefined modern computer graphics and revolutionized parallel computing. More recently, GPU deep learning ignited modern AI — the next era of computing — with the GPU acting as the brain of computers, robots and self-driving cars that can perceive and understand the world. More information at http://nvidianews.nvidia.com/.

Certain statements in this press release including, but not limited to, statements as to: the benefits, impact and features of NVIDIA DRIVE AGX Orin and the Orin SoC; developers being able to leverage their investments across multiple product generations; creating a safe autonomous vehicle as perhaps society’s greatest computing challenge; and virtually every company working on AVs utilizing NVIDIA in its compute stack are forward-looking statements that are subject to risks and uncertainties that could cause results to be materially different than expectations. Important factors that could cause actual results to differ materially include: global economic conditions; our reliance on third parties to manufacture, assemble, package and test our products; the impact of technological development and competition; development of new products and technologies or enhancements to our existing product and technologies; market acceptance of our products or our partners’ products; design, manufacturing or software defects; changes in consumer preferences or demands; changes in industry standards and interfaces; unexpected loss of performance of our products or technologies when integrated into systems; as well as other factors detailed from time to time in the most recent reports NVIDIA files with the Securities and Exchange Commission, or SEC, including, but not limited to, its annual report on Form 10-K and quarterly reports on Form 10-Q. Copies of reports filed with the SEC are posted on the company’s website and are available from NVIDIA without charge. These forward-looking statements are not guarantees of future performance and speak only as of the date hereof, and, except as required by law, NVIDIA disclaims any obligation to update these forward-looking statements to reflect future events or circumstances.

© 2019 NVIDIA Corporation. All rights reserved. NVIDIA, the NVIDIA logo, NVIDIA AGX, NVIDIA DRIVE and NVIDIA Orin are trademarks and/or registered trademarks of NVIDIA Corporation in the U.S. and other countries. Other company and product names may be trademarks of the respective companies with which they are associated. Features, pricing, availability and specifications are subject to change without notice.

A photo accompanying this announcement is available at https://www.globenewswire.com/NewsRoom/AttachmentNg/a209e1e8-c405-45a0-88b2-8a402395bf7a 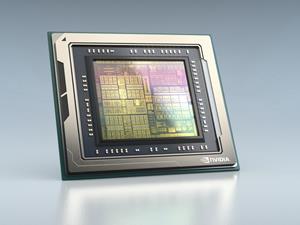